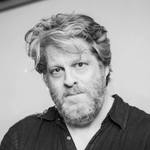 Because Eric Idle once wore a pink tux and I've never been able to forget it.

I started writing when I discovered I couldn't, or perhaps just didn't want to, do much else.

I am an American born near the close of the post-War baby boom. My father's help in learning the Latin binomials for every tree, flower, fish and bird that we encountered at the shores, waters, and forests of western Washington State spurred an early interest in the secrets hidden in language. I studied Latin, Greek, classical Hebrew, Akkadian, ancient Syriac, and a touch of late dynasty Egyptian hieroglyph and somehow ended up a priest. I left the active ministry just short of 19 years of service, and though blessed by that opportunity to serve, am glad to be out from under the yoke.

I am a Christian of the eastern Orthodox persuasion, a skeptic of human-generated hierarchical systems, and a weekend astrophysicist. Occasionally, I see God in everyone and everything, but mostly I endure his silence.

It is difficult to write some definitive list of my literary influences, because books - and their creators - don't really work that way for me. Yet, the worldview of a select few has provided something like constant encouragement and direction for more than a few decades, and I've come to the reasonable conclusion that there is no little influence there. These writers include Cormac McCarthy, Marilynne Robinson, Anton Chekhov, John Burnside, Thomas Pynchon, William Gaddis, Fyodor Dostoevsky, David Remnick, Ian Frazier, David Foster Wallace, John McPhee, Norman Maclean, the Prophet Isaiah, the biblical Minor Prophets, the Kalevala, the ante-Nicene Fathers, and a host of others I've neglected to include, but you've got the idea.

I am dedicated to ever add to this list.

My writing has appeared in the United States on "The Millions" website, and been referenced at LitHub and The New Yorker. In Ukraine, I produce occasional articles in Russian and Ukrainian for the cultural websites cultprostir.ua and LB.ua.

Born and raised in the United States, I suffer from a deep ache for my country, yet life has taken me to the former Soviet bloc over these last 25 years. Here, I have lived in Akademgorodok, Russia, Prešov, Slovakia, Ternopil, Ukraine and, for the last dozen years, in a thousand-year-old neighborhood in Kyiv, Ukraine, in a small flat in a pre-Russian Revolution structure put up by the architects of Tsar Nicholas II, working to "enhance the provinces."

I write largely from experience, and I am inclined to the stories of what Christ would have called "these little ones"- the humbled, the unwashed, the worker, the outshined. If there is anything thematically resonant in my writing, it is that of the search for beauty, for those singularities of the divine, the sublime, those moments of exceptionalism, those uncommon sparks of true genius that speak on some ageless, immutable scale. The kind of thing flirted with consistently in the work of Bach, Beethoven, Miles Davis, Cormac McCarthy, and Andrei Tarkovsky.

What can you expect here? That I will only put out my best on that day.